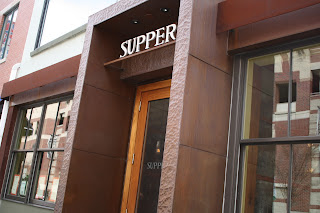 My first brunch experience at Supper was wonderful and well thought out—specifically on January 1, 2011. Following an awful, awful evening packed with a series of unfortunate events, B and I decided to journey into Philadelphia on New Year's Day and while heading to South Philly on this particular day of the year may be either insane or mandatory (whichever sort of person you are), I had some fun-infused festivities to make up for and kindly, Supper did not let me down.
We played the late-morning/early afternoon brunching cards right, handpicking all the perfectly darling dishes speckled throughout the farm-forward eatery's menu. Aside our friends LeeAnne and Ryan, we loaded up our tabletop with everything mouthwatering, from pumpkin pie french toast and red velvet waffles, crispy apple beignets and cornbread hush puppies, a three egg frittata and a Supper Benny, wild mushroom toast and of course, a Supper Dog (see below). 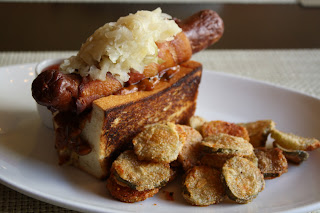 While, from just rattling off our menu items, it may appear as though we ordered the entire brunch lineup, and I wouldn't have wished for a better start to the new year. Since the year has so far followed with loads of blissful scenarios (thank goodness), when I recently was invited to a food & drink writer meet-up at Supper, I easily became giddy over revisiting.


On Saturday, April 2, many enthusiastic food lovers piled into the gorgeous upstairs setting at Supper, B and I included. With the lovely, vibrant second-floor as our backdrop, it was a pleasure attending such an event (thank you Wendy for organizing it). It was marvelous to mingle with several locals who I have shared tweets with in the past, and even more so, meeting a bunch of new friends who I hope to share drinks with in the future. 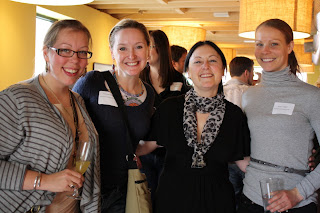 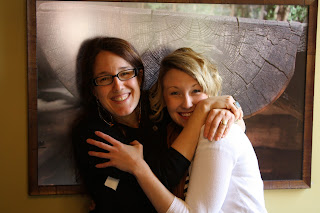 cheesy photo with my cheese-loving comrade 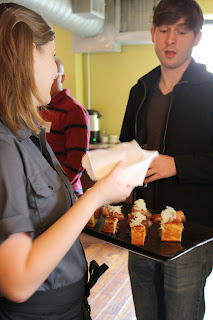 B admiring the Supper dogs
Of course, a midday soiree for a grub-loving gang would not be complete with unforgettable snacks, and this time around at Supper, I was happy to lengthen my list of lovable dishes I have sampled. We can skip my in-person gushing over the red velvet waffles and Supper dog (again), and speed to my Saturday favorites: the Dock Street pancakes topped with candied apples, vanilla foam and housemade crack jacks; and the Dixie Biscuit, big sandwich bites bursting with two scrambled eggs, country ham and pimento cheese. 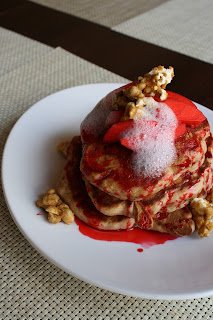 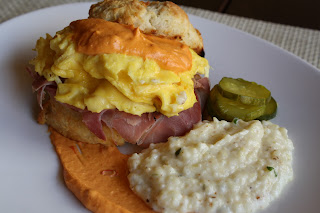 I can't wait to go back and binge of the best of Supper's brunch—time and time again. I will—without a doubt—continue to pair the brunching experiences like I had the past 2 times, with many, many marvelous mimosas. Also, a big thank you goes out to Jen & Mitch of Supper: Your hospitality, welcoming atmosphere and incredible bites made our blogger bash a success!
Posted by amy strauss at 9:37 PM 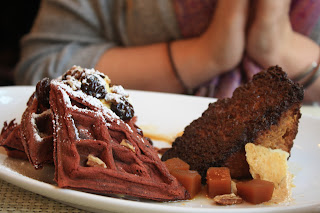 I am off to enjoy a mouthwatering brunch amongst fellow food and drink bloggers of the Philadelphia area. While, in all honesty, I have been an awful blogger for Apples and Cheese, Please as of lately, I am on a mission to pop by more often--even if my main source of writing (seen here) can get hot-and-heavy/slightly time consuming.

But really, there is no better way to spend a Saturday than heading to Supper (where blogger meetup happens to be) for their Red Velvet Waffles, which are delicately topped with an airy cream cheese frosting, pecans and insanely-addicting bourbon-soaked cherries.

Mitch and Jennifer Prensky (chef/co-owners; seen below with pup Bennie) offer a welcoming and casual, farm-to-table experience right off of South Street, which always hints at sheer perfection, whether I'm looking for an upscale dinnertime tasting menu or several fine brunch bites. 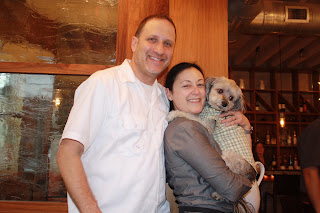 Visit Supper at 926 South Street of Philadelphia or online at supperphilly.com.
Posted by amy strauss at 10:21 AM

the girl behind the pink door: deliciously diving deep into the cakes and candies by maryellen 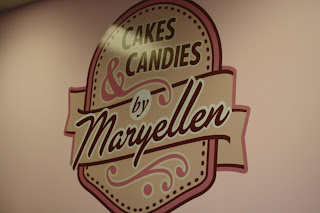 Only steps away from the hustle and bustle of West Chester Pike, a pretty-in-pink sign hangs on one of the petite highway shopping strips reading, vibrantly, “Cakes and Candies by Maryellen.” As an edible labor of love for a former occupational therapist who cherished the flavors and aromas of her afternoons spent in her grandmother's kitchen, Maryellen Bowers began embracing her hereditary skills as an artisan baker and confection creator almost 16 years ago, but it was only in 2009 that she considered taking baking orders full time.

“My Nanny would watch my brother and I, and she would seat me in a booster and I would sift sugar on all the Chruscikis [Polish fried cookies] she had made,” said Bowers. “She would bake everything and I would always help. Every time I came home, I looked like a ghost.” 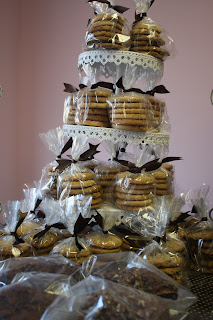 Influenced by the heartfelt moments of her past, Bowers always embraced baking and candy making as a hobby, clinging to the kitchen trades as an escape from her full-time therapist career. But, with the constant growth of her word-of-mouth baking business over the last several years, she knew that her self-taught craft (some of which sourced from her grandmother) would lead her to soon peddle her bountiful baked goods and confectioneries in her own dessert boutique.
Read more »
Posted by amy strauss at 9:46 AM