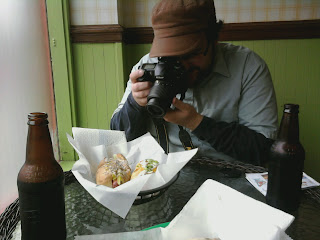 Quite honestly, I obsess over finding like-minded food fiends who share the same passions for all things edible and drinkable as intensely as I do. I almost become scream-from-the-mountaintop excited when they reveal their adoration for the same eateries and establishments that I must regularly revisit or I will become a ravenous, raged female.
Lucky for me and my food friend quests, I stumbled upon Joel Armato's food blog, Eat The Blog, on an evening last week, and soon sought to have his appetizing story heard. 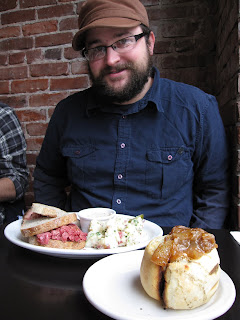 Armato, as of January 1, 2010, challenged himself to photograph every single thing that he devoured for an entire year. Something that he wished he had done before, he began to document his eating feat via a blog, which is where Eat The Blog comes along.
His story doesn't end there, either. Working as a Beer Ambassador for New Holland Brewing Co., he travels up-and-down the East Coast spouting the grace of the artisan-crafted brews, as well as sampling the cuisine of as many neighborhood dining scenes as his lil' heart encounters and desires.
I scribed a full-fledged feature on this fine bearded eater this weekend, which can be viewed here.
Posted by amy strauss at 10:34 AM